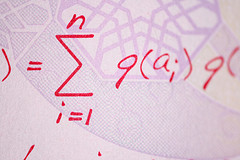 I was in ninth grade, when a tenth grader appeared in my class, asking for me. TTV – Mr. TT Varadakutti – was my math teacher – a slim, small made man, with a distinctive red mark on his forehead. He was one of the teachers who both excited us and gave rise to dread when he called upon us in class or outside. Why was he calling me?

I walk over to the 10th grade classroom and enter tentatively. I pointedly avoided meeting the 30 odd pairs of eyes that are staring balefully – so I imagined – at me.

“Sir, you called?” I address TTV who’s busy writing something on the board. “Ah, there you are Srikrishna, tell me what’s ….” and he shoots three or four questions at me. For a moment, I’m flummoxed and then begin to answer him. I was so focused on his rapid fire questions that I lost sight of where I was and what else was happening. Then he drops the bombshell. Turning to the 10th graders, he says “Aren’t you ashamed that you guys can’t answer questions that a ninth grader can? ”

I beat a hasty retreat, without meeting the eyes of any of the tenth graders and tried to stay out of the playground the next couple of days!

Practice makes perfect While TTV didn’t usually pull us out of class to snub our seniors, he constantly challenged us and expected us to push ourselves. He’d expect us to be able to work out problems on the fly and in our heads, under pressure. His constant refrain was to practice, practice, practice. And he didn’t leave it to chance, he made us work on enormous number of problems.

Make learning fun When teaching us commutative law (or any other basic principles or axioms) he’d first write it on the board.

Then he’d read it out “A plus (pause) (superfast) b+c (pause) equals (superfast) a+b (pause) plus c – the first time he did this we wondered if something had happened to him. However, over the several months (and years) he taught us, he trained us adequately to be able to transcribe any problem he dictated correctly without his having to write it on the board. It also made it immensely fun. In the bargain, what seemed like a silly or contrived game – became thoroughly absorbing. We also developed great respect for brackets and parenthesis early 🙂

Expect the best from yourself and others As my little trial by fire in front of the 10th graders showed, I was likely the most surprised by being able to answer his questions. Starting with his evident passion for the subject, his high expectations from his students and his willingness to work hard with us, he never lowered the bar. Years later when I took Engineering math in graduate school or the IIT entrance exams right after school, his lessons stood me in good stead.

Thank you TTV sir. 35 years on, since graduating from your class, I continue to not only value, but use, the lessons you taught me. I’m grateful for having had you in my life and all that you’ve taught me.

This is the second entry in my 30 days of gratitude series.