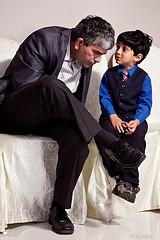 I am never sure how best to answer this question. My first, unvoiced response is a curt “no.” But I then settle for a more ambiguous, “No, I am not a medical doctor.”

In India, where politicians insist on being addressed as Dr. A or B, usually having been bestowed an honorary degree — deserved or not — by admiring vice-chancellors, it was not uncommon a generation ago to see folks append a BE or MA (English) as my grandfather did, after their name.

While a PhD does stand for Doctor of Philosophy (in my case, in materials science and engineering), I have always been uncomfortable being addressed as Dr. Srikrishna — somewhat misleading and a bit pompous, I felt. If I had any momentary doubts it was quickly cured after my travel agent booked me on a couple of flights as Dr. Srikrishna and I had to explain to the crew that I was not a medical doctor when they called upon me to attend to a unwell fellow flyer. Talk about truth in advertising!

Yet, I am asked this question each time I take someone to the hospital. For the record, I must admit that on more than one occasion, the word “assertive” has been used in conjunction with my public behavior.

For those of you who have not been in the emergency room of a major hospital in India, assertive is not necessarily bad, in fact it may be a necessary condition to get proper and timely care. Sure, emergency rooms (or as we insist on calling them in India, “casualty wards”) are filled with emergencies, small and large, but even when they are having the occasional slow night, doctors appear to work on a need-to-know basis.

More importantly, your need to know seems to be directly related to your social standing in the doctor’s eyes. Granted, the internet and Google have made every patient “an expert,” complicating an overworked doctor’s job.

For those of us who’d like to believe that class and other atavistic divisions are a thing of the past, experiencing an information triage in a seemingly uncaring doctor’s hands is the clearest indication of how class as a social arbiter not merely lives but thrives.

“You did what?” was the first reaction of my wife’s best friend when I recounted the story of the birth of my second child. The scene was the birthing room in a small nursing home that my wife’s obstetrician ran in South Bangalore.

The room had unfortunately been painted all too recently and the fumes were not helping matters, as the midwife encouraged my wife to push. The good wife was gritting her teeth and the doctor waltzed in to declare that she might give my wife a shot to move labor along.

“Are you sure you want to do that?”

The question popped out of my mouth even as I gritted my teeth wondering where my wife got the power to squeeze my hand so. The doctor, to her credit, didn’t freeze in shock – nor did she ask me “And in which college did you get your medical degree?”

Instead she briefly tried to explain to my wife and me why she thought it was a good idea. The mid-wife and orderly were as bug-eyed as my wife’s best friend was upon hearing about my “questioning the doctor” and at that in the middle of child birth. Luckily our second child had other ideas and chose that very moment to put in her appearance without waiting for further inducement, chemical or otherwise.

I’ve found that this doctor, like many others, was prepared to listen and willing to explain her thought process, and therefore treatment options, patiently to me. But the very same doctors make snap judgments, often unfavorable in nature, about their patients’ educational and financial status — based on whether they spoke English, how they were attired (in western or traditional garb), how old they were. And they routinely choose to play God with little or no explanation.

As a scientist and engineer, I set out to test this hypothesis by appearing only in traditional white dhoti, speaking only in Tamil or Hindi, and my relatives and friends cooperated by having a variety of medical challenges with great regularity. Concussion from a fall for a 12-year old; appendicitis for a nine-year-old; dengue-like viral fever; clavicle fracture in an 80-year old; uterine fibroids for middle-aged cousin; possible tail bone compression soccer injury; all topped off with prostrate surgery and a urinary tract infection. The local nursing home, regular hospital and super-specialty hospitals – government- and private-owned — all figured in this multi-year experiment.

Repeatedly, whether it was an in-law having hip replacement done (“old”), a parent having a parathyroid surgery(“traditional”) or a chauffeur’s child being treated for inhaling toxic fumes (“blue-collar, uneducated”), the doctors’ explanation of the problem, prognosis and its treatment was governed by their perceptions of the patient.

So these folks and I as their “traditional” attendant got, at best, a sketchy overview. When my wife or I, dressed in our best, demanded in English that we be educated about the issues and choices, we were given the low down, usually starting with the “Are you a doctor?” question.

A close friend was a cardiac care nurse in California and I have heard my share of horror stories of how doctors talked down at and treated nurses shabbily. It almost seems an occupational hazard. So this doesn’t seem to be a problem uniquely confined to Indian doctors.

However patients, who are the paying customers, and especially those who require a detailed explanation of their situation and choices, seem to get the short end of the stick if they don’t speak the right language, wear the right clothes or otherwise belong to the “right” group even as doctors are making life-or-limb decisions on their behalf.

It’s disheartening when we are able to get more information and options about a 30,000-rupee flat screen LCD television from a high school-educated salesman than from a physician about to perform a procedure that not only costs more but needs to last a life time.

This article first appeared in the Wall Street Journal online on Jul 9, 2010

Be Self-aware – Lessons from my dad

Be Grateful – Lessons from my dad