The last two days my team and I were at an offsite at a local hotel. The meeting room, was in the basement, at the end of a long corridor, nestled in a far corner of the hotel’s Business Center. While our meeting was productive it was a stuffy two days. Made me wonder, how comfortable the US President would be in the White House bunker (at least what I’ve seen of it in movies) given its even greater depth.

When you spend all day in a stuffy room, drinking fluids, having the rest rooms nearby helps. The first time I walked up to them I had to look closely to figure out which door led to the right room. A smart designer had decided to use two tiny androgynous figures, with the words HE and SHE written below them to designate the men’s and women’s restrooms.

Not the best of experiences when you are in a hurry (and when like me you’ve walked into the wrong room, while on a phone!) Alas the story didn’t end there.

During a short break we walked up and out of the lobby to catch some fresh air. On my way back, I decided to use the restroom right behind the lobby and encountered the following two doors and signs that now read GENTS (that’s what I think it said, the fancy font made ready hard) and LADIES. Clearly the same designer was not involved in the design of these two (ornate) doors. Luckily I was wearing my glasses and headed into the right room without any mishap. 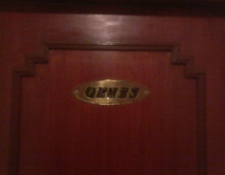 It could have been worse I suppose, with signs in German (HERREN and DAMEN) or symbols for male (♂) and female (♀) or playing cards (KINGS and QUEENS). At least for our toilets, why can’t we make things simple with LARGE pictures (for the language or visually challenged) and words for the graphically challenged. This is a solved problem.

I wish I could attribute this to one or more zealous or incompetent interior designers. However, starting from even the most common and widespread of software products (can you say Microsoft Word), we encounter such design inconsistencies every day. All of us, whether involved in building software products, ticketing portals or hotels or mobile phones, need to provide our users consistent, predictable and self-evident user experience aka good design.

I have a hard enough time figuring things out, when I’m not in a hurry to go! So please let’s pay attention to our poor users and help them have a more consistent and intuitive experience.