Discretion – a skill founders and CEOs need in spades 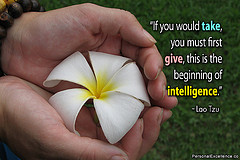 As parent of two teens, I’d like to claim that my wife and I never argue in front of them. I’d of course be lying. That being said everyone with children knows, that even if their kid can’t rattle off the 5 times table, they can recall every last word you said in your last spousal encounter, down to the tone of voice. And if you are [un]lucky, it will be saved for posterity in their biography.

Now as an entrepreneur, founder or CEO why should this story be relevant to you? Basically, this is a lesson on discretion – or the lack thereof – and how it can come and bite you in the rear!

As an entrepreneur, founder and especially as a CEO, you are going to having some rough times out there – being plagued by self-doubts, or worse yet certainty that you are screwing up. You will also wonder why you are doing what you are doing (or not) and is this whole thing a mistake? You wouldn’t be the first one to have had these thoughts nor are they likely to occur only once.  The question is what should you do when you are thus assailed?

What you should NOT do is share it with your partners – immediately or without reflection. Usually it’s best shared with someone outside your founding team – a friend, an advisor and if you are lucky, with a spouse. This last can be tricky and deserves a whole another blog post.

I have worked in and with multiple startups and started two of my own, where the founders were friends, sometimes having known each other for many years and other times, been colleagues who’d worked with each other. Almost in all cases the co-founders had been friends before becoming business partners.

And in almost everyone of these instances, when one or more founders have been plagued by self doubts, voicing it without forethought to other founders or senior staff has caused immense grief. Not unlike arguing in front of the kids (or other 3rd parties) who have no context on my wife and our deep abiding love or other ongoing issues 🙂

In every case, talking about it with a non-stakeholder first would have done away with much thrashing and grief that otherwise ensued. Talking it out with a third party always worked better – in terms of achieving distance which helped in gaining clarity and perspective before looking for answers.

Many a times, our self doubts maybe no more than a fleeting moment of vulnerability – or the result of a bad day or week, a setback. We may bounce right back. At other times, they may be grounded in facts – in that we are operating at the limits of our ability or capabilities, personal life (or the lack of one) may be intruding into our professional lives or we may be avoiding a critical set of actions/decisions at work to avoid unpleasantness.

And if there are real issues at play that need to be brought up to your partners, it should not be done in a flippant comment or regrettable aside that can be misconstrued or worse. It can be presented with some distance and perspective that you’d have gained in discussing it with a non-stakeholder first. This alone is a good reason to seek out a mentor or advisor, but almost any friend, who’s not involved in your business and has no axe to grind will do.

So the next time you think of making a casual remark to the other founders, especially those who are your friends, bite your tongue. You are a parent – or at least need to behave as a responsible one – if you want to keep the job!

Be Generous – Lessons from my dad