The Secret to Preventing Email Wars at Your Startup

Whether a startup or a large corporation, email has become just a fact of our work lives, it’s hard to imagine a time when it wasn’t so. Email useful as it is, however seems to create as many problems as it addresses. Beyond the chain letters and phishing emails or spam, flame wars conducted over email is probably the biggest cause of productivity loss, in both large and small companies.

Most back-and-forth email stinkers or flame wars are preventable and many times seem downright silly or petty. Yet they seem to pop up all over the place with near-despairing regularity. Flame wars, particularly between colleagues, is a huge emotional sink, sapping productivity and motivation. This is even truer when the parties involved are in the same office. It is to overcome these that we’ve formulated a simple rule – yep 1 single rule to prevent email flame wars.

The No 3rd email rule Simply put this rule states, if one person has sent an email (#1) and a second person has responded (#2) and it’s clear that they are not agreeing, or not happy – there should be no 3rd email sent. Instead the two parties should talk in person (sometimes this only requires swivelling in one’s chair) or pick up the phone, if not in the same office.

Think about it – most email flaming starts due to one of two reasons:

Regardless of who started it, their intent and what was being actually said, the No 3rd email rule works excellently by stopping the electronic conversation, which would at this stage usually deteriorate into accusations, counter accusations and fingerpointing. The beauty of this rule is it is independent of who wields the organizational power between the sender and the recipient and nips the blooming potential conflict in the proverbial bud.

Like all good rules, it’s simple to state and understand, a little bit harder to practice. We are still working on it. What are you waiting for? 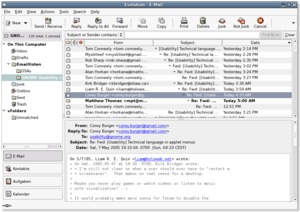 Several years ago I read an article by Esther Dyson on making email effective and it’s stayed with me to this day. Granted some of its resonance stemmed from the insights Esther shares in her article (you can read the original here) But more of it is due to the fact that I see badly written emails nearly every week. And this is particularly galling when it is someone who wants you to do something. They need a favor, an introduction or your time but can’t be bothered to write short, specific and clear emails. Things get worse in a corporate setting, when various political considerations come into play and more time is spent on figuring who’s on the To:, CC: lists than even the body of the mail. Of course the worst mails are the ones written by our inner reptiles without a human editor or better sense intervening before the SEND button is hit.

Despite numerous claims otherwise, email is here to stay and continues to grow from strength to strength. But here are three simple steps each of us can take to make email more effective and less painful.

Here are the three steps:

SPECIFIC – keep your emails specific. If you can’t state why you are writing an email is 10 words or less, you shouldn’t be writing the email. Usually an email is a call for a specific action by the reader – in which instance it helps to call out the fact that an action is required (I use the initials AR in the subject line) and the action itself in the subject line. The more specific the mail the greater the likelihood that it will be read and acted upon. It’s not the family christmas letter where you pile in all and sundry information whether pertinent or not. By keeping the mail specific, it also usually cuts down on the number of people who need to be copied on it.

CLEAR – having decided to be specific, it is critical to be clear. Far too many of the mails I receive require interpretation and often  help from my colleagues to decode or my having to ask the sender, what it was they were trying to say – which generates even more emails. And no this doesn’t happen only with  Japanese writers, who can be excused as non-native speakers of the English language but nearly every corporate email writer, who perpetually seem to be in a hurry to get as many emails out as possible. The problem of clarity is compounded in emails that are not specific to one topic and things go from bad to worse in no time.

SHORT – keep your mails short. This is one I’ve struggled with for a long time myself. Brevity requires clarity on our part and focusing on one topic or subject should ideally make it easier to keep it short. All too often long emails are a result of both lack of focus – trying to cover a lot of ground in a single email – as though we are charged by the email and lack of clarity – not sure what is we are saying or worse yet laziness to take the effort to say it as precisely and concisely as it can be said.  This is also the most misunderstood piece of email etiquette in my opinion. There as those who take brevity to an extreme, that you are not sure if this was a SMS you received – there’s neither a greeting (who’s it addressed to? was it meant for you or others on the cc list) nor a close – almost feels like you are being shouted at (even if it’s not in ALL CAPS) – worse yet you are not sure what it is they are saying. And others who haven’t yet left the previous century and their notes are filled with both flowery language or overly obsequious greetings and the use of big words (such as obsequious) when shorter words would do and anything less than two pages is short.

The good news is that short emails have to be specific and clear to be effective.  Each of these attributes builds on the other and you will find your emails will not only be more effective but hopefully acting as a model for folks at the other end of the line to emulate.